Menu
Home | Nezařazené | Neuschwanstein Castle: 10 Facts You Need to Know Before You Go

Neuschwanstein Castle: 10 Facts You Need to Know Before You Go 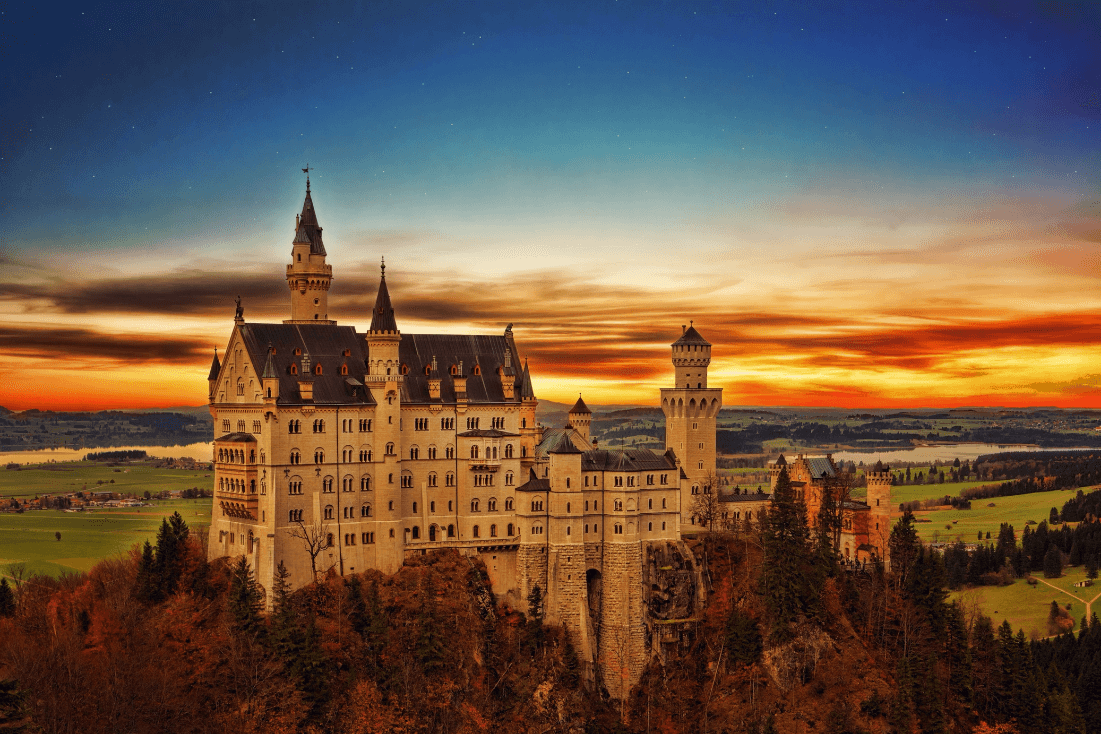 Have you ever wondered how the Neuschwanstein castle looks inside? Is it even worth visiting? And is it true that it was built by a mad king? It’s certainly the number one tourist attraction in Bavaria, Germany. Take a look at this article and find out, where is the best spot from which to view Neuschwanstein and how to learn from my mistakes.

10. How to get to Neuschwanstein

The Neuschwanstein castle is the gem of the Bavarian Alps in Germany. The front door to the castle every visitor passes through is Hohenschwangau—a small town under the hill. It’s only a 60 minutes drive from Innsbruck, or 90 minutes drive from Munich. There, you can park your car, buy the tickets and choose one of three options to get up to the castle:

Roundtrip (discounts for children and students; kids up to 6 for free)

I recommend taking a walk, especially if you’re not time-oriented. It’s only 2 km (1.3 mi) long, but rather steep (especially for less fit people it may be rough). However, if you’re not used to walking, it might not be the best idea to go there at all. Even if you take the bus or carriage, they stop some 300 m (1 000 ft) from the castle and the rest of the hill to the top is up to your legs. Anyhow, in my opinion, neither the carriage, nor the walk is as exciting as I would have imagined.

9. The History of Neuschwanstein is not that long

The castle was built as the romantic and a bit delusional retreat of King Ludwig II. He is mostly known as the “mad king” or more euphemistic “fairy tale king”. Either way, Ludwig suffered from depression and paranoia, and being an eccentric figure with a mighty imagination, his political career wasn’t one of the best. He ascended to the Bavarian throne at the age of 18, but thanks to Prussia, he actually only reigned for two years. So it was this magical place, where (at least in his thoughts) he could be a true king figure.

On the other hand…good for us. That loss of sovereignty is believed to have driven him to start building his own romantic, yet lavish palace. Despite the medieval look, the construction began in 1869. At those times, the whole culture was enchanted by the medieval stories, castles, and motives, so it was only natural Ludwig wanted to build the castle in neo-gothic style. He was also an avid patron of art and a good friend of German composer Richard Wagner, so there is a great deal of pictures and decorations inspired by his operas as well.

8. The castle was never finished

Talking about the history, it must be said that the castle was never really finished. The original grand scheme included over 200 rooms, of which only 14 are currently furnished. Well, they say dream big, but one should do the math first, Ludwig.

Anyhow, Ludwig never really enjoyed the castle to the fullest. His unfortunate death came in 1886, when he was living in the few completed rooms. On the other hand, it was just as interesting as his whole life… to these days it’s not clear, whether it was suicide, murder, or just a fatal accident. Just a few weeks after his sudden death, the castle opened its gates to visitors, however, the final touches continued for another six years.

7. Neuschwanstein is called the Castle of Paradox

Honestly, it has many names, but this one is actually the most interesting. Think about it. Ludwig had it built long after the heyday of castles with no apparent reason (one would say, against all reason). And not only he wanted it to be grandiose, but also functional. According to plans, there was cutting-edge technology included in the project.

You might ask yourself what cutting-edge technology was in the 19th century. Really, it takes just a couple of brain cells to realize it was the golden age of new inventions, so the answer is: basically everything that separates us from the dark ages. Central heating, flushing toilets, running water (even a hot one), telephones, elevators, and so on. So it was supposed to be fairytale medieval-like grand castle, but with the whole comfort of the newest inventions (now you see the paradox).

6. The Castle itself is not that tall

It does look truly majestic, towering over the valley, however, it’s not really as tall as one could think. The highest tower of the castle is only 65 m (213 ft) tall. But make no mistake, residing on top of the steep hill makes it no fun to get there by foot Also, considering how huge castles complexes are in the Czech Republic, I expected Neuschwanstein to be much bigger overall. From my perspective, it felt rather like a dollhouse when I saw it for the first time.

4. Don’t be disappointed by the interiors

As impressive as it is from the outside, you should bear in mind, it was never completed and properly furnished. So the interiors are not nearly as beautiful as the outside view. This is not to say, you shouldn’t go inside (I myself wanted to, but more about that later), just to warn you not to have high expectations (Dickens pun totally intended). As I said earlier, there are only 12 completed rooms, which are not even fully furnished—the Throne Room with no throne speaks for itself. Therefore, the tour takes only about 30 minutes. Also note that taking photos inside the castle is prohibited.

3. Buy the tickets online in advance!

And here comes my story about the not-so-worthless tour. You see, I’m always one step ahead, so I figured that it would be smart to buy the tickets for the tour online in advance and I did. I was all excited about the visit when the unpleasant lady at the ticket office told us they were bought for a different date. Okay, just a small glitch I told to myself, there will be no problem changing the tickets for today’s date. However, the lady pulled a face not unsimilar to this, so what do you think?

Yeah, if you guess I never got inside, you’re right. Not that I would be afraid of her, but I just had no desire to pay 30 EUR (35.5 USD/ 25.5 GBP) for both of us…again. On the bright side, now you know, not only to buy the ticket in advance, but also check the date you are buying it for.

2. What is the perfect spot to take a photo of Neuschwanstein?

Nevermind, I thought, there is nothing worth seeing inside anyway, I will be satisfied with the perfect Neuschwanstein-in-the-background selfie. I got it eventually, only I had to wait on the crowded Marienbrücke for a good half an hour. Marienbrücke is a 15 minutes hike from the castle. It’s a bit steep, but there is no entrance fee and the views are really worth the plight.

If you’re not lazy, you will be rewarded even more though! Don’t stop at the bridge and continue up the hiking trail. You will find more viewpoints along the road higher on the cliffs. It’s quite challenging, so be sure to have the right shoes for the dirty road. On the other hand, most people will be waiting in line on the bridge, while you take perfect pictures of the castle with the mountains in the background and the gorge in front.

Okay, a mini German language course. In the first place, it’s not the original name of the castle. While King Ludwig II was alive, the palace was called Neue Burg Hohenschwangau.

So, with this vocabulary, you can understand there was some old castle Hohenschwangau. And you’re right. On the other side of the gorge, there is an older Hohenschwangau castle, where king Ludwig spent his childhood.

Unlike Neuschwanstein, it was finished and people actually lived there, so this one is worth visiting too. But let’s move on.

After Ludwig’s death, people started to call it Neuschwanstein. Now, if you remember something from our first lecture:

Sure, the New Swan Stone castle doesn’t make much sense, but I didn’t promise it will. Allegedly, it’s somehow connected with one of Wagner’s characters, the Swan Knight. Anyhow, now, when we identify the individual words it will be easier to answer the ultimate question: How the hell do you pronounce this?

Bonus: When is the best time to visit Neuschwanstein castle?

You see, that one is really up to your preferences. I personally think, there’s no bad one if it comes to that. Taking the astonishing views of the valley at different times of the year, it has its charm in every season. The summer months, however, are the peak season, so it might be a good idea to exclude them. During July and August, it gets very crowded there for sure. And even the walk up the steep hill may be much more pleasant in spring or fall.

Concerning the best time of the day, I would certainly recommend the early morning. You can enjoy the scenery and take a few photos and then go on the tour, while it’s not so crowded.