Skip to content
Menu
Home | Mexico | mexico-places | What to Do in Puebla: Top 10 Puebla Attractions

What to Do in Puebla: Top 10 Puebla Attractions

Vibrant, enormous, and full of colors and history. The city of Puebla attracts tourists from all over the world, offering them unforgettable experiences. Find out what are the best Puebla attractions in our guide to Puebla, including top activities and must-see places.

What you need to know about Puebla city

A very common problem people come across is that they mix up Puebla city and Puebla state. It can create lovely misunderstandings. For example, if someone keeps persuading you that Puebla city is 34,306 square kilometers (13,246 square miles) large, don’t trust them. They are talking about the state.

So, the Puebla city:

And, as I suppose you’ve already guessed, Puebla city is the capital of Puebla state in Mexico.

This is why you should visit Puebla city

Puebla in Mexico is one of the most beautiful non-European cities I’ve ever seen. And that’s something—I’ve been in North as well as South America, Africa, and Asia. To see all Puebla attractions worth visiting, you should spend at least two days there.

What’s great about Puebla is that it’s within convenient driving distance from Mexico City. The journey takes only about two hours which means you can squeeze it into your Mexico itinerary pretty easily.

You should take into account that Puebla is really far-reaching and you will need a car to move from one place to another. If you’re not experienced in driving in Mexico, read my article where I explain everything important.

Top 10 things to do in Puebla

When it comes to Puebla activities, these 10 are the best:

10. Laugh at the smallest volcano in the world

Cuexcomate in Puebla is considered to be the smallest volcano on the planet and is therefore visited by tourists laughing at it and saying it’s not worth a visit. But if you read somewhere that it’s the smallest volcano… It’s a mistake, and the writer didn’t fact-check the text. Cuexcomate is not a volcano, it’s an inactive geyser.

It’s 13 meters (42 feet) tall and a staircase leads down in its channel. If you follow it, instead of hot lava and flowing magma you can stumble upon hot artists and flowing wine—cultural events are held in the geyser. How cool is that?

9. Take a walk among architectural gems

Take a walk in Zócalo, the city center. You’ll explore narrow streets, colorful colonial houses, diverse people, cozy cafés, and lovely shops. You can do all sightseeing on foot; all architectural landmarks are within walking distance. Don’t forget to visit:

Do you prefer a proper hike instead of a peaceful walk? Try my top 10 best hikes in Mexico.

Hotel tip: I recommend staying at the Banyan Tree Hotel in Puebla. It’s in a great location close to all the architectural gems mentioned above. The prices start at USD 265 per night for 2 people.

Just so you know, we really spend time choosing the best places to stay in, it’s not just a random selection. If you decide to use our link to book any of the hotels in the article (or even if you click away and book a different hotel), we get a small commission at no extra charge to you. Thank you!

Breathe in the true atmosphere of Mexico by visiting the local traditional market: El Parián. 112 stands made of brick offer handcrafted items, high-quality and cheap at the same time. You’ll get to buy not only souvenirs, but pretty much anything you could need

7. Do (NOT) touch a book in Biblioteca Palafoxiana

The library is open for a visit between 10 AM and 5 PM daily, except on Mondays. The visit takes around 15 minutes.

Look at the picture above and make a guess: How long do you think it takes to build such a cathedral?

The answer is: It took 74 years (with some breaks). The construction began in 1575 and was finally finished in 1649, and consecrated to the Virgin Mary. Today, it serves as the see of the Roman Catholic Archdiocese.

The building is truly fascinating. It consists of 14 lateral chapels and the main altar. The interior is ostentatiously decorated with ornaments, statues, and paintings.

Warning: It’s not allowed to take pictures inside.

Hotel tip: We’ve stayed at Hilton MM Grand Hotel. It cost us around USD 65 per night and the quality matches the price – overall the hotel was very nice, and we enjoyed our stay there, even though the breakfast could’ve been better.

Cholula is the paradise for all history lovers and enthusiastic explorers of Mexico’s ancient cultures. It’s the oldest still-inhabited village in Mexico and hides true gems. For example the largest pyramid in the world. Read the 12 facts about Mexico article to find out even more about Mexican history.

Before you start yippeeing and hooraying, let me disappoint you a bit: The pyramid is covered by soil and plants, and resembles a hill rather than a pyramid. But still. The Great Pyramid of Cholula (Tlachihualtepetl) is 450 meters (1,480 feet) wide in its base. For comparison, the Giza pyramid is 230 meters (750 feet) wide.

When you look at the picture, a question might creep into your mind: Why is there a Catholic cathedral on top of the world’s largest ancient pyramid? Well, when Spaniards came to Mexico, they apparently thought: Look, a pagan building! Let’s destroy it! What a great idea! And they covered the pyramid with soil and built a cathedral on top. (Actually, most of the ancient Mexican buildings were christianized by the Spanish after they arrived in the 16th century. But that’s another story.)

The archeological site in Cholula offers plenty of interesting activities: not only the pyramid and the cathedral, but also ruins, tunnels, a museum, several churches, festivals… Deciding what to do depends on how much time you have. For your own sake, I hope you have a lot. If you’re interested in these kinds of monuments, you might also want to read about the 7 Best Aztec Ruins in Mexico.

San Francisco Acatepec is a typically Mexican baroque church. Vivid colors shine far and wide from the facade, making the building one of the most interesting things to see in Puebla (in San Andrés Cholula, to be specific).

If you feel an irresistible urge to get away from tourist-packed Puebla, Orizaba is the place to go to. It’s a city in the state of Veracruz, approximately 2 hours from Puebla by car. I’ve summarized the top 8 places to visit in Veracruz state for you in a separate article. Here’s a bunch of tips on what to do there:

Teleférico is a cableway which will take you up the hill above Orizaba. The visit is simple: go up, enjoy approximately 30 minutes of beautiful views, and get down again. It’s open from 10 AM to 6 PM every day.

Take a walk along the river in Orizaba (Río Orizaba). Locals run a free zoo there, so your walk will be spiced up by animals all around you. It’s surrounded by cafés and restaurants so you won’t starve either.

Fancy a stroll in the wild? 500 Escalones are 500 stair steps, creating a gorgeous hike with a dam at the end. In my opinion, the hike is more about the journey than about the dam so there’s no use in going entirely down, if you’re out of time or tired.

Palacio de Hierro, Iron Palace in translation, was designed by Gustave Eiffel in the 19th century. It was made of 600 tons of steel, and its price was 100,000 pesos—equivalent to 21.3 million Mexican pesos (1.1 million US dollars) today.

There is a café in the palace. Don’t go there. The service is unpleasant, and the coffee undrinkable.

Final tip for Orizaba: How to get there

That fact the road goes down, together with the fact it leads also to Veracruz, Mexico’s second largest port, causes very heavy traffic. Get ready to honk at a truck or to. Or get up early and set off in the morning, when the road is empty. Read about other helpful Mexico travel tips.

Africam Safari is a private zoo with more than 2,500 animals and over 300 species from Africa. When I first stumbled upon it on the internet, I was a bit skeptical: African safari in Mexico? But I gave it a chance and I didn’t regret it.

The tickets are quite expensive, but definitely worth it. You’ll go to the zoo in your car, and slowly drive among the animals. I must pay a compliment to the safety—the lioness in the picture below jumped in front of our car and wanted to scratch it, but the moment she raised her paw, the zoo staff came and drove her away.

1. Chapel of the Rosario

Finally, we are getting to the most beautiful tourist attraction in Puebla. And that’s the Chapel of the Rosario. I’m not pious and chapels don’t usually impress me… but this one is on a completely different level than any other chapel I’ve seen.

The chapel is hidden in the Church of Santo Domingo in Puebla, and is described as the eighth world wonder by some. Every inch of it is covered in gold. Built in the architectural style called New Spanish Baroque, it shows the wealth of the Church and is full of symbolism. The opening hours are from 11 AM to 1:30 PM and then again from 3:30 PM to 5:30 PM every day, except for Mondays.

Enjoy the best vacation of your life

Explore the tips and tricks about different destinations in Mexico, and make your vacation unforgettable. With our articles, you can enjoy the best and skip the rest: 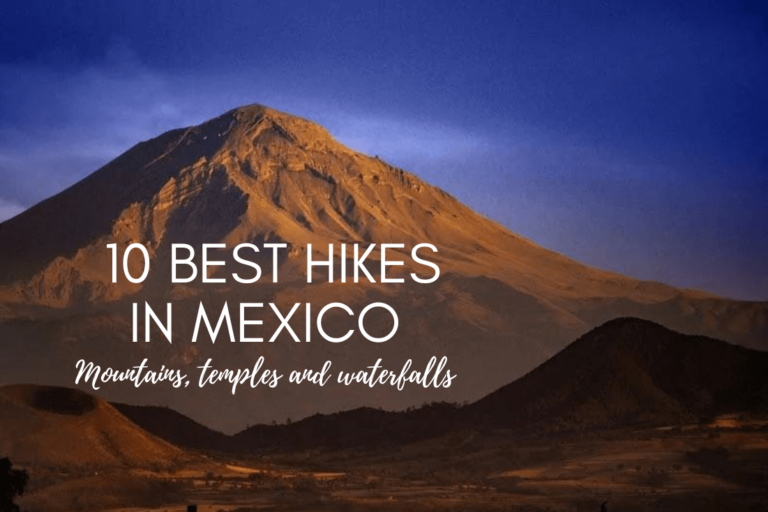