All You Need to Know About Driving in Peru 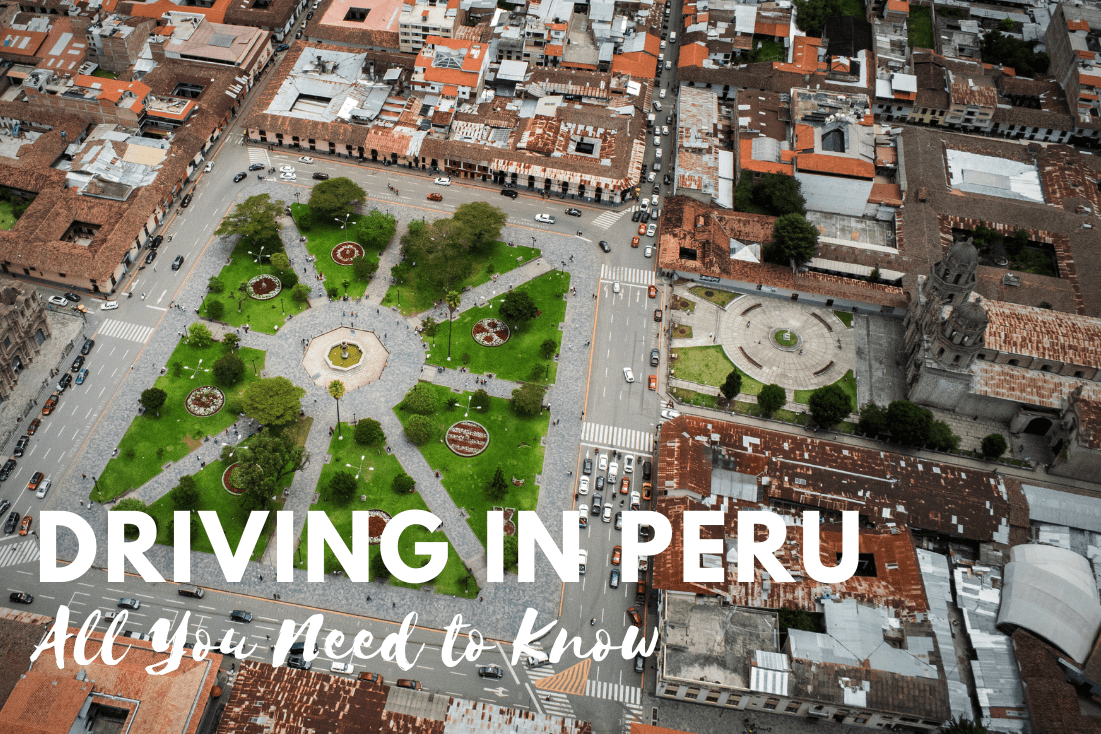 Peruvians are some of the kindest, most helpful and courteous people I’ve met during my travels. Until you put them in the driver’s seat. Then they turn into aggressive, angry, idiotic monsters. Especially in Lima.

As is the norm for our travels, we rented a car right at the airport upon arrival (in Lima). After a long flight from Europe and 2 hours (!) of waiting for our luggage at the most frustrating airport on the planet, we headed to the car rental place only to be told that our car isn’t available. Another half an hour of back and forth later, we were driving in crazy-ass Lima in the biggest SUV known to mankind. By the time we got to our hotel in Lima, my blood pressure was up and I was ready for a pisco sour.

I could just end this article here, because that basically sums up our experience of driving in Peru.

Peru is probably the only country in the world where I think it could work out better to just use taxis instead of renting a car. From a financial and mental health perspective.

Alas, once you leave Lima, it does get better, so I’ll keep going.

Is driving in Peru safe?

Imagine a crowded bumper car arena and whoever gets to their destination first wins a million dollars—that’s how it feels to be driving in Lima, with Arequipa in a close second. The rest of Peru is easier.

I felt safe almost everywhere during our travels in Peru, aside from the outskirts of Arequipa and some places outside of Miraflores in Lima. And even then it wasn’t like I feared for my life or anything.

Tip: Arequipa is absolutely a fantastic destination, so don’t take it off your itinerary just because I mentioned it here. You can book a hotel here, and read about everything to do in Arequipa here. Just to be totally transparent: If you use our link to book your hotel (and not just in Peru, it can be anywhere), we’ll get a tiny commission at no extra cost to you.

But the one place I felt in danger was while driving in Lima. I’m not being funny. It’s like they leave their IQ at home, hop into a car and drive like maniacs. And once they step out of the car, everyone is lovely again.

Everybody has a car with so many scratches and dents they don’t even care anymore, and honking seems like the way to communicate everything from “watch out, I’m here” to “get out of my way you &^%#@!”.

Not only are Peruvians angry drivers, they aren’t even tolerant of their own driving culture and get angry at others being angry drivers! It’s just a whole lotta stress on the roads in Peru!

Don’t park your car just anywhere, there are plenty of paid parking lots that are monitored. Better to be safe than sorry. It’s not expensive, either, with parking prices around s/10–15 per day. Most hotels in Peru will also have secure parking lots for free.

The rules of the road in Peru

The basic rules are the same as everywhere else in the world. It’s the lack of following them that is the problem.

If you follow the rules, like staying within your lane, driving at the speed limit and not cutting in front of others from the right, you literally won’t get to where you need to go.

So you, too, have to drive like an idiot in Peru. The largest and loudest have the right of way. Not that they’re asking or waiting to see if you understand that’s the case.

Even though driving in Peru is easier away from the big cities, drivers still don’t use common sense or courtesy, and the speed limit is only for tourists and babies. You will be left in a cloud of dust even by trucks that look like they aren’t road-worthy on many occasions.

On roundabouts, the right of way goes to those entering the roundabout, not those already driving on it.

You drive on the right side of the road in Peru.

In Lima specifically, you’ll need to adapt to the unwritten rules of the road. Here’s what I learned during my time there, which was only a few days, but every minute spend driving in Lima feels like an hour, so you have to learn fast:

Renting a car in Peru

We rented a car at 4 rental companies in Peru and in almost every one of them the vehicle we had booked wasn’t available upon pickup. It seems to be a common rip-off tactic, so stand your ground. They try to sell you a more expensive car, obviously, or give you a lesser car instead of the expensive one you already paid for.

For this reason I’d suggest never pre-paying and always waiting to pay until you actually get to the counter. It’s easier to scam someone if you’re already holding their money hostage.

The rental companies we used were mostly well-known international brand, but in Peru, I’d go against my own advice next time and use local companies based on online reviews. The international chains are just franchises and have nothing but the name in common with their parent company.

The one rental company that we were very happy with was Alkila Rent a Car in Arequipa and Cusco. They were professional and accommodating, no scams. If you’re going to Peru and looking for a good place to rent a car, these guys are it.

A 4×4 is the best option, because you will be driving on dirt roads a lot. That said, it’s not like you’re going on the Dakar Rallye, so no need for monster trucks. We went a little overboard in Paracas—totally not necessary to have a big truck, but fun!

(We also stayed in the fabulous DoubleTree Resort by Hilton in Paracas and had the best time there, which might’ve added to our excitement about Paracas National Reserve—you have to go there!)

Take out not only mandatory insurance, but collision damage insurance as well, because you’re bound to get a nick or scratch at one point or another. In driving conditions like these, the added peace of mind is a no-brainer. It’s not a no-money-er though, and the extra insurance can come to almost as much as the actual rental rate. Per day!

Outside of the big cities, the driving is fine—compared to Lima, at least—aside from the road quality.

There are frequent potholes in the road, and dirt roads are the norm in the countryside. And not just in faraway places, but also in tourist destinations like Sacred Valley. The turnoff to the “road” up the mountain before the popular Rainbow Mountain trek will leave you wondering where you’re GPS got it wrong. But no, you really are expected to drive on that for the next two hours.

The cities are full of speed bumps. They don’t have any effect on the speed of the traffic and are just annoying.

Most of the highways in Peru are toll roads. Don’t be like us thinking you can pay for your toll using a credit card. Cash only.

And they don’t just usher you through so you don’t hold up traffic. A police man actually forced the 10 cars lined up behind us to back up, letting us turn around and then drive in the wrong direction back down the highway to the nearest ATM.

You’ll be stopped at police check points often. In 90% of cases they just wave you through when they see your beautiful face. If you are stopped, they take a minute or so to check all of your documents and then scan for drugs or whatever. They never gave us any trouble, like asking for bribes. If they don’t like your face, you’ll be pulled way over and get to be checked more thoroughly. Yay!

Treat gas stations on the highways and between big cities as little fuel oases. Always stop and top up even if you think you don’t need to yet. Sometimes there are gas stations on every corner and then nothing for 150 km. The distances in Peru are huge, so keep your eye on your fuel gage. You don’t want to run out of gas in the boonies.

At gas stations, there will always be an attendant putting the gas in for you. Make sure to tip them. They’ll usually thank you by washing your windows or checking your tire pressure.

One positive thing is that pumping your oversized 4×4 full of gas won’t hurt your wallet—a liter of gas in Peru costs USD 1!

Since the driving conditions are so shady and rental prices are high, you really should consider using taxis in Peru. They are cheap, easy to come by, and you won’t have a panic attack three times a day navigating the roads in Lima on your own.

Taxi drivers even turn on the taxi meter if you ask them to! But realistically, it’s better to talk about the price beforehand or just go for the easiest option and use a taxi app.

Cabify is available in Peru’s bigger cities. Just know that when choosing your vehicle category, premium is the only way to go. Normal will get you a pile of junk, luxury is the same pile of junk but it has possibly been washed in the last month, and premium will get you an ok car with working seat belts, something the other categories can only dream of.

A few price examples: a taxi from Cusco to Ollantaytambo, something you will need on your way to Machu Picchu, will cost you USD 30–40. A taxi from Lima airport to Miraflores is USD 25, which is kind of a lot, but that’s to be expected since it’s an airport route. Within the city itself you won’t pay more than USD 4 to drive between the districts.

You’ve got ample time off and you’re going to Peru—awesome! Getting a full 4 weeks in Peru is a fantastic idea considering how huge the 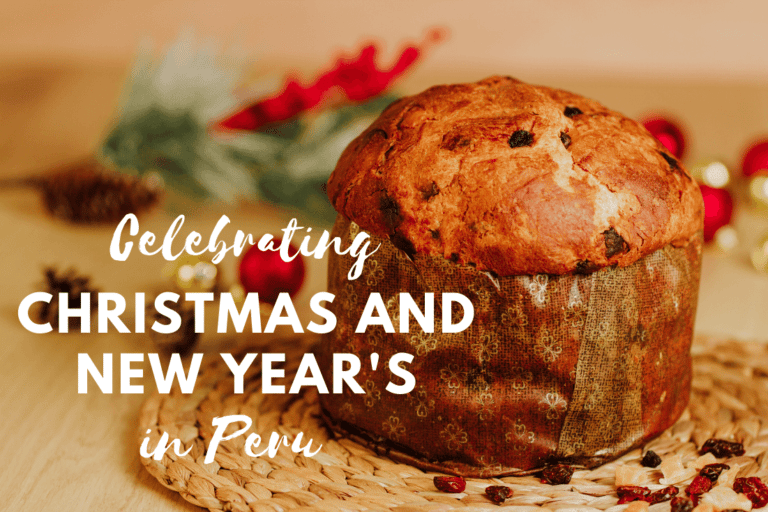 What Christmas and New Year’s is Like in Peru

What do you imagine when you say Christmas? Probably a Christmas tree, snow, the cold outside, hanging out with the family by the fireplace, Santa

Peru is such an underrated gem of a country that even if you spend 2 weeks traveling between the highlights, you’d have barely scratched the

All You Need to Know About the Nazca Lines in Peru

The Nazca lines are a collection of hundreds of unusual geoglyphs (designs produced on the ground) in the middle of Peruvian desert. For years, archaeologists