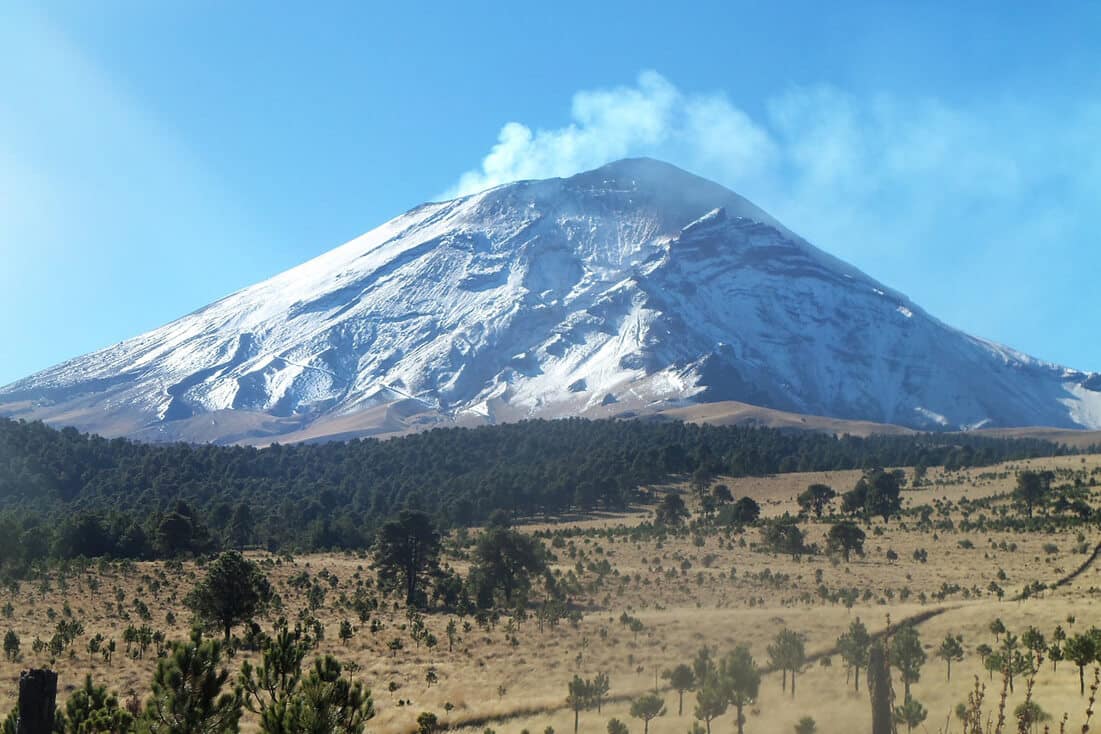 Almost surreal views, crispy air, and volcanoes encased in snow. That’s Izta Popo National Park, just an hour´s ride from Mexico City. It’s one of the best options for hiking, but also for only taking short walks or enjoying the surroundings. What hikes can you take in Izta Popo? Is it possible to visit Popocatépetl? How much is the entrance fee, and how can you get there? Find out everything you need to know in our article.

With overwhelming views, hikes for all levels, and incredibly fresh air, Izta Popo National Park is the most popular destination for trekkers in Mexico. It hosts the country’s second- and third-highest mountains: the Popocatépetl, that rises 5,428 meters (17,802 feet) above sea level, and Iztaccíhuatl with its impressive 5,230 meters (17,160 feet) of elevation.

The park itself stretches on 39,819 hectares (98,395 acres) of land just 40 kilometers (25 miles) from Mexico City; that’s another reason why the park makes a perfect box to tick off travelers’ itineraries. A half-day or day trip from Mexico City to Izta Popo is a must-do activity for all visitors of the capital.

Izta Popo National Park: Get ready for the weather!

In Izta Popo National Park, you will escape the heat of sunny Mexico whether you want it or not. As most of the park lies more than 3,000 meters (9,840 feet) above sea level, you’ll have to handle crisp air and low temperatures. That means two things:

Popocatépetl is the most dangerous volcano in the world

Popocatépetl is called “The Smoking Mountain” for a good reason. As a true example of nature in action, the volcano is not only active—it’s currently erupting. Since 2004, scientists have observed Popocatépetl occasionally spewing lava and shooting rocks high into the sky.

But that isn’t all; Popocatépetl is even more badass than it sounds. Together with Vesuvius (Italy) and Cotopaxi (Ecuador), it belongs to the world’s most dangerous volcanoes. In case of a massive eruption, Popocatépetl could destroy Mexico City with its metro area of 22 million inhabitants, and Puebla with over 3 million inhabitants in its metro area. But don’t worry, volcanologists have the situation under control and visiting Izta Popo is safe. Just don’t go too near.

Iztaccíhuatl, on the other hand, is active, but dormant. Its last eruption came the same year general Ulysses Grant was elected president; that’s how dormant it is. (And just in case you’re wondering, it was in 1868.) Currently only rare gas eruptions are reported, such as one in October 2019.

Did you know that Mexico has over 40 active volcanoes in total?

Popocatépetl: To climb, or not to climb?

The mountain of Popocatépetl is encased in snow and ice. But snow and ice are not the problem. Lava is. It’s no wonder that climbing and hiking on one of world’s most dangerous volcanoes is not allowed. But that doesn’t need to make you feel blue—you can still conquer Iztaccíhuatl or any other hike in Izta Popo National Park.

Hiking under Popocatépetl is a once-in-a-lifetime experience. We arrived to Izta Popo full of anticipation but the thrilling sceneries were even better than we imagined. These are three trails you can take, the first one easy, the second one hard, and the last one super hard.

Note: I recommend hiking in Izta Popo only if you’re in a good physical condition; as I mentioned, the altitude makes even the easy trails difficult. If you don’t feel like hiking, don’t. I guarantee that even visiting the park by car and staying in the marvelous surroundings is worth your while.

Did you know that altitude sickness is a real issue? It can surprise you at high elevations because of low levels of oxygen, making you dizzy or even causing vomiting. It may occur if you’re above 2,500 meters (8,000 ft). Get some ibuprofen and enough fluids ready to treat it.

By the way, there are a few things you should know about driving in Mexico.

This trail starts in the parking lot called, surprisingly, Paso de Cortés. After paying the entrance fee, you will set off towards La Joya on a wide dirty road, occasionally meeting cars. The road is mostly flat and offers almost surreal views of the national park and its peaks. After you get to La Joya, you will turn back and head to Paso de Cortés again.

Tip: You can make your trip a bit harder. After La Joya, you can climb part of the steep slope of Iztaccíhuatl and then turn the same way back to La Joya when you’ve had enough.

The distance from Paso de Cortés to La Joya and back is 15.3 kilometers (9.5 miles); the rest—climbing a bit of Iztaccíhuatl—depends purely on how much you’re willing to walk. The route is well signed, lined with resting places.

On the Monte Tlaloc trail, you’ll conquer the elevation gain of 1,176 meters (3,858 feet) to see the highest temple site in the world, located at the altitude of 4,151 meters (13,619 feet) above sea level. The mountain was a sacred place for the Aztecs, who performed human sacrifice at the summit.

By the way, the Aztecs were bloodthirsty butchers. Read more about Aztec culture in Mexico.

The hike starts in the town of Rio Frio de Juárez and leads through the forest, trying to discourage you by a steep slope. But if you go on, phenomenal views from the peak will be your reward. The trail goes the same way out and back, and is a little over 20 kilometers (12.5 miles) long. It’s really far from Paso de Cortés so don’t try to combine the two hikes into one.

Did you know that Tlaloc was the ancient god of rain? The mountain is named after him.

The dry rocky slope of Iztaccíhuatl is here for all experienced adventure hunters. Emphasis on the word experienced. The slope is steep, and the elevation gain enormous. Climbing the mountain is recommended with a guide.

The trail starts at the parking lot called La Joyita, often shrouded in clouds, surprising tourists with sudden weather changes. A narrow path leads up the mountain, sometimes slippery because of the rocks and snow. A mountain cabin—Refugio de los 100—offers a roof over travelers’ heads near the peak. After you reach the summit, you will head the same way back.

A favorite option is hiking only to Tercer Portillo and back. In that case, the trail is 5.5 kilometers (3.4 miles) long, and the elevation gain is more merciful.

Tip: What I really recommend is looking the place up in Google Maps and displaying the Street View of the trail. That will give you an idea of what the path looks like.

There are more hikes than the three I described above. If you’re interested in exploring them, ask local guides. They are keen to help.

Izta Popo National Park lies a stone’s throw from Mexico City. The easiest way to get there is by car. You can comfortably park your vehicle in any of the parking lots I mentioned:

My advice: Try to arrive as early as possible. The lots quickly get full.

Where to eat in Izta Popo?

Izta Popo is a busy place. Good for you; thanks to the number of tourists, there are restaurants to eat at. And nothing tastes as good as Mexican food after a challenging hike.

If you take the hike to La Joya or to Iztaccíhuatl, the most convenient option is to eat at Tacos doña Jessi, a restaurant located next to the Paso de Cortés parking lot. Should you choose the Monte Tlaloc trail, you’ll stumble upon several restaurants in Rio Frio de Juárez. But if you don’t mind driving and eating outside the park, you’ll find nicer restaurants in the nearby town of Amecameca.

Tip: Don’t rely on restaurants and pack a snack in your backpack. Together with a big bottle of water.

How much is the entrance fee to Izta Popo National Park?

The admission fee to Izta Popo is 35 pesos (1.75 US dollars) per person. Once you arrive at a parking lot, you’ll pay it and obtain a wristband as a proof.